Not too long ago I watched a Game Geeks episode about a fantasy audio drama series called Ebon Storms. I bookmarked it, thinking it might be interesting, and then I forgot about it. Then came this afternoon when I needed some audio into which I could escape for a few hours.
Man, what a ride.
Now, I'm probably going to be judged harshly for recommending this series, considering the quality, but you have to remember that I came up at a time when gamers had a, "Take what you can get" approach to fantasy and gaming media. We watched stuff shot on VHS, and we liked it, damn it!
I once had a discussion with Vin Diesel, in a movie theater as the credits for the Warcraft movie rolled, about how I enjoyed the film and learned to enjoy any fantasy I could get my hands on because it had been so difficult to find the stuff growing up. He seemed to understand, but he was unforgiving in his fairly harsh judgment of Warcraft. Oh, well.
My tastes and past aside, Ebon Storms is not that bad. It's in fact a commendable effort to capture the experience of following the chronicles of what seems to be the in-world perspective of a gaming group. It's the story of a world and the characters who strive to save it. It's typical fantasy fare, and I admit that I ate it up.
The website for the series is rough, apparently not having been updated in a very long time, but it is active and it's possible to find the episodes there or on iTunes, via a link on the site. It's worth doing some digging in the layers of that antiquated web mess, especially if you're at all like me and just want some typical, old fashioned fantasy fun in your life.
So, give Ebon Storms some of your time and ignore the fact that it sounds like college kids are struggling to convey character through a clunky script. Just enjoy the escape this fantasy romp provides.
written by Jonathan Sample at 5/30/2022 09:08:00 PM No comments:
Email ThisBlogThis!Share to TwitterShare to FacebookShare to Pinterest
Labels: fantasy, tabletop gaming

A Gamer Apart from Gaming

One night, in the mid-aughts, after a night of gaming, some human parasites who were preying on my friend Matt, helped themselves to his television and DVD player in order to show me a movie they claimed I just had to see. Of course, they didn't discover this great new movie for themselves. Like the television and DVD player on which they intended to play it, along with the apartment where we watched the movie, the movie belonged to Matt.

What I was shown came straight from the dealer tables of Gen Con Indy, created by some amazing folks who hailed from the once-great Northwest. It was a movie from Dead Gentlemen Productions titled The Gamers. I didn't realize it then, because I had been ignorant of it up to that point, but this movie wasn't a singular thing. It was actually part of a genre I had unfortunately neglected to notice up to that point. That genre being independently created media about the fantasy gaming hobby, created by people like me who had a passion for the hobby and personal stories to tell. Stuff beyond the publications of the big game companies. Material made by the people who played the games and with whom I could relate.

The term, "Rabbit hole" is overused these days, but that night watching The Gamers was the start of my tumble down one of the greatest rabbit holes of my life. To this day I find that I am still very much subterranean, wandering around the branching tunnels I've discovered over years of inhabiting that incredibly deep warren.

For years after first watching The Gamers I went on to find more from Dead Gentlemen Productions and many others. Some of the passion projects I discovered were short films or series, and others were audio dramas or recordings of game sessions. There were also fantastic comics, magazines, and webcomics. The spirit behind all of this amazing stuff was genuine and these works were obviously created with love, originating in a time before Wizards of the Coast, Twitch, and the hellspawn which support the both of them took gaming so mainstream that the hobby has now become no longer recognizable as the one I have loved since my first time rolling up a character, over twenty-five years ago.

Gaming culture was out there, waiting for me, and I was thrilled to find it. All of this media allowed me to go beyond just playing and running games, which was all I had been doing since I first started playing. It provided me ways to celebrate gaming and maintain a connection to my hobby even when I wasn't able to play. It made it possible to not feel alone in a world in which, at the time, tabletop gaming was frowned upon, mocked, and dismissed. It's a shame that I started gaming in a comic book and gaming shop and somehow managed to miss the gaming magazines and comics, but then again, I can recall that it was difficult to browse or shop for anything when I was a poor kid who was barely able to afford dice. I didn't even have the chance to own any rulebooks until after I graduated from high school. All I had for my first several years as a gamer were my first set of dice, my dice bag, and a miniature my first DM purchased for me to use in his game.

The days of gaming and reveling in the material created by fellow gamers were some of the best of my life. It felt like the hobby was always going to be this rich, creative haven apart from the loud and overly commercial world of shallow entertainment and empty passions. Surely the people who disparaged my hobby would never trespass or find a way to dominate it to the detriment of everything I held dear.

Reprehensible and tasteless people spend their lives wandering about, like heinous scavenger fowl, circling areas in hopes of a meal, never earning one for themselves but instead taking those belonging to or left by others. Once they find something of interest the flock descends and then it's time for every respectable and capable being to leave. When they come it's time to make for the hills.

I now live in an age when everything I loved and was viciously mocked and shunned for loving, is now mass-marketed and warped to appeal to soft-brained conformists who want to purchase the semblance of outsider culture in order to make themselves seem more interesting and complex. Basic bitches, gender-bending fetishists, activist psychopaths, and knuckle-draggers are all fashionably rolling dice now, and the companies who make games for the tabletop hobby are bending and breaking themselves to meet the demand. The buzzards are hungrily feasting and its a revolting, nauseating sight.

I'm not a part of the, "Active" tabletop gaming world anymore. New product isn't being made for old sods like me. It's made for the simple, the queer, the identitarians, the racists, and the oppressive morons who make the world an unhappy place in which to live. They're devouring my hobby, and so I'm gone.

Why am I writing this, then?

Well, I took all that I gathered and collected during the happy years, and now I reside far away and above the disgusting and macabre feast that is the modern games industry, independently enjoying everything magical that came before this damned times. They can ruin the future, but I will preserve the past.

What keeps me going, even if it's difficult for me to find a game in which I can play or people with whom I can roll dice and have fun, are the pieces of media I found over the years. Those movies, magazines, comics, books, and even game manuals sustain me. These things are all I have, and instead of quitting my hobby and abandoning all hope, I can sit here and revisit my joy again and again. Because even if the masses ruin everything, I will never let them touch those things which have given me my good times, the best times.

I am now a gamer outside of the gaming hobby. I am a lone dice-rolling fan of games which have been destroyed in order to appeal to the worst of humanity. I am a gamer who lives in his blessed hermitage, guarding the treasures from the past of his beloved culture, safeguarding them from the barbarians without.

Traditional gaming, real gaming, along with independent gaming media are what keep me going. 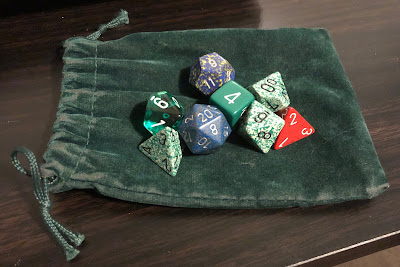